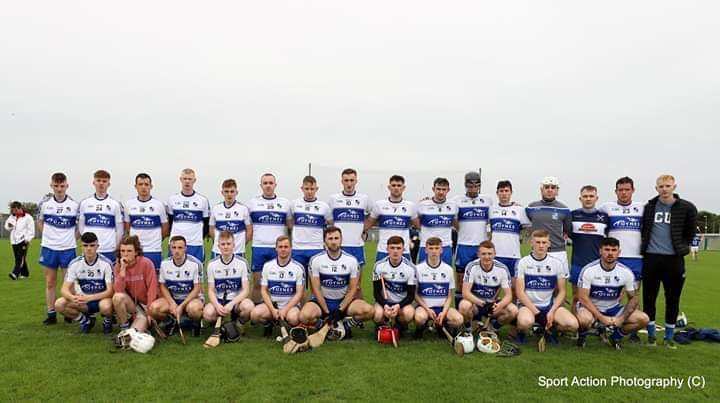 Published: about 3 years ago

Download our mobile app to hear more about Croagh/Kilfinny GAA.

Our Junior A hurlers made their exit from the County championship with a narrow defeat to Kilmallock. On an afternoon that was almost ideal conditions for hurling with a slight breeze both teams served up an exciting, close game with a tense finish. Our lads started the better team and had some excellent passages of play with some very accurate passing to hand. We went ahead inside the 1st minute with a great score from play by Declan Mullane followed almost immediately with a long range point from Tom McMahon. We were well on top in most positions with our half back line dominating with Brian McHugh in control and Tom McMahon and John Wall providing great ball into the forwards. On 4 minutes we had a further point from a free from Tom McMahon followed a few minutes later by a excellent point from the stand side near the side line from Brian Hannon. At this stage with 10 minutes gone we were ahead Croagh/Kilfinny 0-04 Kilmallock 0-00.

Kilmallock began to come into the game and had their first score on 11 minutes with a point from play. This score was cancelled out almost immediately with a pointed free by Tom McMahon on 12 minutes.

For the 2nd quarter of the game tackling was hard and fierce and some dubious decisions by the referee were being questioned by all including the large attendance, a number of yellow cards were dished out as the contest over heated at stages. Another pointed free by Tom McMahon on 19 minutes put us 5 points up, 0-06 to 0-01. During the next 10 minutes we had some great passages of play but failed to convert that into scores, hitting a number of wides that on another day we might have scored. Kilmallock scored their 2nd point of the game on 29 minutes with a point from play which was again cancelled out within the minute with a pointed free from Tom McMahon. Kilmallock finished out the 1st half on the 31st minute with their 3 point of the game a point from play leaving the half time score Croagh/Kilfinny 0-07 Kilmallock 0-03.

Kilmallock started the 2nd half just as we did the 1st and were in control for the first 15 minutes. They scored from play on 2 minutes and a point from a free on 5 minutes, we responded with a point from a free by Tom McMahon on 7 minutes but they added further points from play on 8, 9 and 14 minutes leaving the scores tied at 8 points each with 14 minutes played. We were starting to struggle with the physical strength of the Kilmallock players at this stage with Kilmallock winning most of the 50/50 balls. They went ahead at the 3/4 way mark with a pointed free and added a further point from play on 18 minutes to go two points up. At this stage we lost Kevin Shanahan who was unlucky to be sent off on a second yellow card. We got a point back with a free from Tom McMahon but Kilmallock were well on top in general play now. Some changes were made by the Management bringing out Brian Hannon and Declan Mullane to the half forward line and center field and this gave the team a lift but as a result we struggled up front with Kilmallock deploying their spare man between their full back and half back line. Kilmallock went two up again on 20 minutes but our lads responded well and a great individual score by Jack Lenihan left just a point between the sides with 21 minutes of the 2nd half gone. Kilmallock responded quickly to that score and cancelled it out almost immediately with a pointed free to go 2 up again. A great effort from play by Tom McMahon left just a solitary point between the sides with 7 minutes of play left. Our lads battled hard and never gave up, we had a few chances which we failed to convert and Kilmallock wet two points up on 27 minutes.

This brings to a close our Junior hurling for the year, we made great progress this year again competing in what was only the clubs 3rd ever appearance in a Junior county semi-final. This was a great achievement and I have no doubt that this group of players will bounce back and make further progress again next year.

Croagh/Kilfinny Bord na nOg would like to thank all who s...

Thanks to each and every person who collected for and sup...

Here is the link to view Live Stream of tomorrow Intermed...

Please see below link to purchase tickets for Nick Grene...

Less than a week left to get your guesses in. All funds r...

Hi Everyone,Thanks to everyone for the tremendous support...

Get live information for Club on the ClubZap App